As a community bank, we are incredibly proud of the relationships we've been able to build with local business owners. 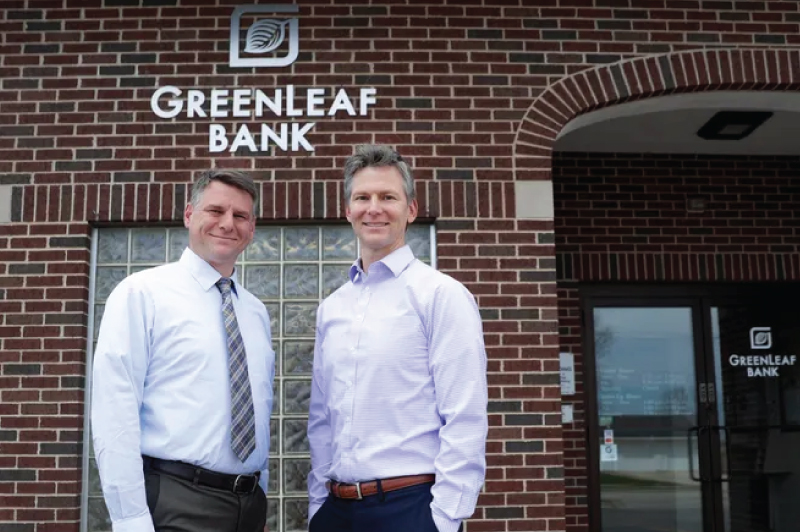 Still growing after more than a century, here’s how a small Brown County Bank has stayed local since 1911.

When the owners of the newest coffee shop in Allouez went looking for a loan to start the business, they found help in an unexpected place.  Larger regional banks were ready to lend, but GreenLeaf Bank, a small, family-owned bank in far southern Brown County not only jumped at the chance to do business with the shop, but also went above and beyond in helping them grow.  "We met with a really, really large bank where we had an account prior to GreenLeaf, but they were more focused on numbers," said Chris Christen, co-owner of Coffee Wizardz, 535 Green Ave., in Allouez.  “They weren't sending us leads for new clients, checking in on us or coming to our café. That was the big difference," he added.

Customers say that personal touch has been a hallmark of GreenLeaf Bank and its predecessors since the early 1900s, and it's a key to how the bank has managed to not just survive, but to grow over the last century.

Ray VandeVoort is the owner of one of the dozen farms near the GreenLeaf Bank branch at 1608 Day St., in the village of Greenleaf.  He has been a farm owner and a client of the GreenLeaf Bank for all his life.  Now 72 and retired, he says the bank has always been there to help him, even as farming became harder.  “I do less now, but we are still farming, and they are still there for us,” he said.  If the bank were to close tomorrow, he knows he could find another bank, but he “would sure miss them.”  “You go there, and they know everybody, they call you by your first name,” he said.

GreenLeaf Bank traces its roots to Wayside State Bank and State Bank of Greenleaf, created in 1911 and 1913 respectively. The banks were united in 1970, when Dave Krutz became the primary shareholder and president of both banks and changed the name to GreenLeaf Wayside Bank.  In 2020, the name was changed to the GreenLeaf Bank.

David Krutz, son of the original owner and now president of the entity, says GreenLeaf Bank has always been a community-oriented financial institution, with a personal approach and very loyal and competent employees.  Most of the bank's staff have been there for 10 years or more — and some for more than 40.  "We have been lucky, they have been so loyal to us; and for those that are retiring, we are thinking promotions (to fill those positions)," said Krutz.

For much of the bank's history, its main customers were local farmers.  “Historically (the portfolio) was a little more agricultural, but that’s been trending down over the years,” he said.  As family farms have closed and the dairy industry increasingly became dominated by large farms, that business began to dwindle.

Wrightstown is a fast growing residential area and today the biggest portion of the bank's business is in residential and commercial real estate, both in the village and in other parts of the region.  Wrightstown's population was 3,688 in 2020 according to the U.S. Census Bureau — up 30.46% since 2010. Greenleaf grew in that same period from 607 people to 918.

Tim Trudell, owner of Complete Auto Body, said the bank has always been there to support him and his business, a vehicle repair shop just two miles from the Greenleaf branch.  He thinks the institution has a strong relationship with the community, something that a big bank might not have.  “I’ve grown (the business) quite a few times and every time they were there to help me,” he said.

The bank's owners have been approached several times about their willingness to sell to a bigger bank, but Krutz feels a commitment to support the community, something he doesn't believe a bigger bank would have. If an offer were to be presented, he said, they wouldn’t sell.   "There have been studies that when a community bank gets bought out or closes, it really affects the local community because we are willing to take more chances than big banks with people we have a relationship with," said Krutz.  He pointed to a study done by the FDIC that underscored the importance and resiliency of community banks.  About 30% off community banks closed in the decade following the 2009 recession, compared to 36% of the 555 biggest institutions that closed over the same period.  Even as many closed, the 4,720 that remained not only survived, but also experienced continued growth while filling a crucial role in lending for commercial real estate, small businesses and agriculture, according to the report.

But besides financial aid to their customers, GreenLeaf also helps with food drives in churches, donations and student programs like "Stingcancer" at Wrightstown High School.  Mark Walters, pastor at Alleluia Lutheran Church in Greenleaf, said the bank helped with the church's mortgage and the documentation to access government grants like the PPP loans during the pandemic. The bank also selected their house of worship for a $2,000 grant last year.   "I think they are very important for the community, and they do a great job, everyone there," he said.

Chris Christen said he and his business partner, Sam Brown, know very little about laws and rules, but at GreenLeaf they found all the support and knowledge needed.  "We actually got wholesale clients from them, different leads on grants to help us get through COVID-19. They really went above and beyond," said Christen.  He feels like the people at the bank want his business to be successful and build a stronger and longer partnership.   “We are just two guys who love coffee, we are not necessarily business people, so having people like them is just wonderful," he said.

Source:  Ariel Perez is a business reporter for the Green Bay Press-Gazette. You can reach him at APerez1@gannett.com or view his Twitter profile at @Ariel_Perez85